Margaret Agnes (‘Marga’) Rope was born in 1882 in Shrewsbury, eldest daughter to a prominent family.  Hers was to be a life in the shadows, but full of turbulence.

Her father had come to Shrewsbury from Suffolk; and on his side of the family, there were a number of artists, in both the visual arts and literature. Her grandfather was an accomplished writer, her aunt a well-known sculptor, and her cousin, Margaret Edith Aldrich Rope (nine years younger), was to become a fine stained-glass artist also.
In later years, the two Margarets would work together.

Marga grew up to be one of the number of women stained-glass artists who were to be associated with the Arts and Crafts Movement. She would produce windows for churches all over the world, nearly all Roman Catholic churches.
Yet, barely any records of her life and her thoughts remain; any that have have been barely researched. 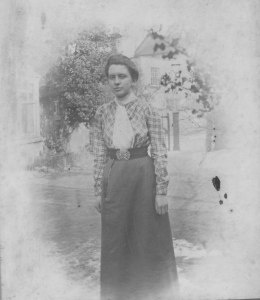 Indeed, very little is known of the personal details of her life.  Only around a half-dozen photos of her exist (see pic right), and of those, three are of her as a child; and only two or three scraps of letters.  Her business’s records were destroyed in a fire in London.  On entering her teenage years, she was schooled at home.

Yet, as she grows up we have a glimpse of her through family anecdotes, which describe her as something of a rebel – smoking cheroots, riding her own motorcycle, going off to art school on her own, wearing her hair short.
Presumably the young Marga was exposed to radical opinions on women’s equality. Her aunt Ellen Mary is known to have had ‘New Woman’ views; her sister Irene defied convention to drive ambulances for a woman’s organisation in WW1; and Marga herself was even to rent out a workshop in a radical studio run by an ardent suffragist – but, if she had did absorb strong social views, she kept them to herself, as far as we know.

She doesn’t even seem to have formally joined the ‘Arts & Crafts Exhibtion Society’, as many of her closest fellow artists did, even though she did show at its events.
She never joined a stained-glass firm; but worked independently, on her own (or in rare collaborations with one other person only).
Her brother described her as having ‘steely’ attitudes and a ‘difficult’ nature – she was apparently quite tough to get along with.  He also remarked on her slightly contrary ways; she would sleep outdoors (on a flat roof) summer and winter.

Out on her own

In 1901, at just nineteen, she shocked Shrewsbury society by converting to Catholicism along with her mother and sisters. She was cut out of her maternal grandfather’s will for doing so.

At much the same time, she took a place at Birmingham Art School, already known by then for its modern thinking; men and women students worked together there in mixed classes.  She studied under Henry Payne, himself a student of the hugely influential stained-glass artist Christopher Whall; and she emerged with grounding in stained-glass making & designing.

Incredibly, her first major commission – when she was just 27 – was for the giant West Windows in Shrewsbury Cathedral, which turned into a triumph, and are still one of her greatest achievements.  Typically perhaps, at the official opening of the windows, she hid from sight, complaining, when her mother tried to push her forward, that she disliked such “advertising”.

A year later, around 1910-11, she left for London,  to work as an independent designer & maker alongside other famous glass-crafts artists at the legendary Glass House Studio in London. The Glass House was run by the suffragist Mary Lowndes, and was an arts-hub known for its radical tendencies and forward thinking.
Without backing from a rich family (her father had died early, leaving the family in straitened circumstances), or funding from an art-world patron or husband, it was a bold move on her part.

During the next ten years, she consolidated her reputation, gaining more and more commissions.  However, despite much diligent research by art-historians, virtually no mentions of her in the contemporary press have been found.  Presumably her commissions came by word of mouth and dint of her strong personality.

However… she did make one fundamental public allegiance – to her faith.
Just a dozen years into her burgeoning career, in 1923, she abandoned it all to become an ‘enclosed’ nun.
An enlightened abbess however allowed her to continue her glass-work in the convent, though Marga had to send any work she did by train to London to be finished off.  The convent’s strict rules on humility meant that she was not allowed to publicly announce her authorship of any work… which presumably she would not have minded…   (In only one instance in fact did she leave her maker’s mark on a finished piece).

After Margaret entered the convent, her work became of variable quality, though some fine pieces continued to be made.  To all intents and purposes, her career is over by 1930, though she did continue to make pieces for Catholic churches, often collaborating with her cousin Margaret Aldrich Rope.
In 1948, the convent community moved to Quidenham, where she died, of pneumonia, in 1953.  It’s believed that she left instructions for most of her sketches and designs to be destroyed after her death.

It is perhaps obvious now why Margaret Rope is so little remembered in art-history (see Neglected).  Not only was she not desirous of fame, but she seems to have gone out of her way to make sure it never found her.
Curiously, it is American curators who are the ones who nowadays seem to appreciate her work. The few works of hers that now come on to the market sell to Americans for tens of thousands of pounds; while, by contrast, in this country, her few remaining artefacts languish forgotten in museum stock-rooms and archives.

Arthur Rope’s definitive website on the life and work of ‘Sister Margaret’ lists:  all her works
See also: photographs of her work, by different photographers: Flickr: Margaret Rope album