There is a book that remains to be written called ‘A Guide to the Great Stained Glass Windows of Central England’.
If there were such a book, Marga would be better known of course, but it would also point us all in the direction of those strange little churches where nothing much exists but for one or two ‘forgotten’ great windows.

I wandered into Alsager Church (in south Cheshire) recently – a large and welcoming church though otherwise undistinguished.  And, there, in a side chapel, was the most beautiful Karl Parsons window.
The ‘Goss memorial window’ (below) features St. Michael & St. Gabriel in a design executed in glass by James Powell & Sons in 1926. 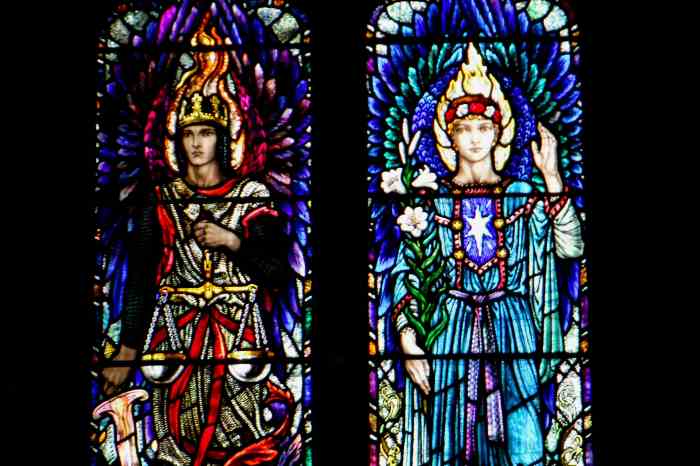 Karl Parsons is, in the history of stained-glass, fairly well-known. His whole career was devoted to the craft, having been apprenticed at the age of 15 to Christopher Whall in 1899. During his short life (he died aged 50), he created glass works for buildings all over the British Empire.

(Incidentally, though I’m biased I admit, I fail to understand why art-historians still see Marga’s work only as a footnote when it comes to assessing the stained-glass greats of the Arts & Crafts Movement such as Karl Parsons (though I think I can guess why – see Ignored By History). For me, she is a leading light right up there with Karl Parsons).

I enjoy this quote from Karl Parsons: “Painting, sculpture, tapestry and every other craft we appreciate by the light that falls on it. BUT – stained glass we can only see by the light coming through it. The glass worker, in fact, designs in coloured light.”

When you think that he produced this Alsager window in the 1920s, it is quite extraordinary. Nobody else in England is really doing anything like this. It is truly modem despite the traditional subject-matter.  The good people of Alsager (a small country town) must have been astonished.

In fact, one could describe it as being in a late Symbolist manner.
Symbolism was more of a French phenomenon, but obviously it must have some resonance, even in prosaic England; and Parsons seems to have known of it, judging from his work.

The modernism of the Alsager window has a tremendous jarring effect too, once one realises that it is a war memorial window.
(In fact Parsons made his living out of memorial windows after 1918, being commissioned to do more than a few.  He knew what loss was: as he had joined up in 1916 to take part in World War One, though it seems he did not serve on the Front).

It is more than likely that Karl Parsons and Marga knew each other well: not only did they both have workshops at the famous and radical Glass House studios in London, but they worked on the same project once. Coincidentally, Parsons was one of the teachers who taught Margaret Aldrich Rope (Marga’s cousin) at the Central School of Art.
One day, we will know – when an archivist studies them – whether he referred to Marga in his letters.
(Marga’s letters are all lost of course, bar one or two).

Yet, for all that I admire Karl Parsons’ artistic vision, I still turn to Marga’s work.

At its best, Margaret Rope’s work has a psychological insight and an emotional content lacking in most of the rest of the Arts & Crafts glass designers.
Marga’s work eschews the lack of humanity present in Expressionism, and also avoids the ethereality of Symbolism.  By contrast, she seems rooted in nature & being, and that – for me – will always be the mark of a great artist.