Skip to content
Home▪Secret of curate who went to War

One of the revelations of the researches into Margaret Rope’s work over the last two years has been the amount of unexpected (yet very precise) details in the stories shown in her windows.
It turns out that the Saint Laurence Window in Shrewsbury Cathedral has more surprises to it than most.

The St Laurence Window (see pic right), which is to the side of the altar in the cathedral, is one of Margaret Rope’s most celebrated windows.  It almost buzzes with colour and energy, while the figure of St Laurence himself is given even greater focus than usual by his curiously icon-like central, elongated composition.
It’s said that the saint is modelled on Margaret’s brother Michael, who actually was a model for more than a few of her figures.

However, although the window is a tour de force of creative power, it is dense with detail too, much of it revealing highly sophisticated levels of research that must have been carried out by Marga.
The historian of Margaret’s windows, Roger Hall, has now published many of his findings online – and you can see his intriguing exposition of the more cryptic elements of the St Laurence window by clicking here.

Death on the Front

However, it is the tracery lights, above the main lights, of this window that contain the most poignant secret.

The scenes depicted high up there in the topmost lights can just be seen with naked eye. They are set inside catacombs at the time of the Roman Empire (St Laurence was martyred in Rome in the third century AD).

What is impossible to see with the naked eye, but which is revealed by cameras, is an inscription on one of walls of these catacombs, above the head of a grave-digger leading a funeral.  It reads:  IVIBAS IN PACE ET PETE PRO NO.. (Live in peace and pray for us) which is not unexpected – but the broken line above it very much is!  This broken line reads:   …AROLUS W SACERD…  – meaning ‘Priest Charles W’.   Who is the priest that is being referred to?
Roger Hall suggests that, in fact, CW is no Roman figure, but a very modern man indeed – Father Charles Whitefoord, who was serving as a curate at the cathedral in 1914. 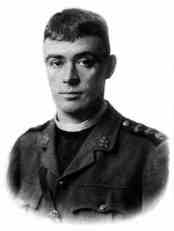 The Revd Fr Charles Blaquhan Whitefoord (pic right) seems to have been an extraordinary individual. Researcher Jane Morgan identifies him as being born on the Shropshire border in 1885 and later being educated at Oxford. In 1916 he enlisted, and Jane finds him then described as a ‘temporary chaplain’ to the British forces on the battlefields of World War One.  He must have decided to stay – as he is reported wounded on the Western Front two years later.  One sad story relates that the field hospital he was then taken to was destroyed by a direct hit from a shell – however, this account needs more evidence.  He was 33 when he died.

(Incidentally, he was not the only Shrewsbury Cathedral priest to go off to war.  The contemporaneous diary for the nuns of The Shrewsbury Sisters of Mercy has an entry which mentions “Father Bleasdale, a tall curate who went to the Front…”)

Margaret was clearly not averse to planting little secrets in her windows.  She acts a bit like a medieval artist in that respect – inserting fascinating and sometimes personal (though unobtrusive) clues into her work.
But why this young man in particular?
And why in such a hidden way?  One would have thought that Father Whitefoord would have been honoured in a quite grand fashion, as being one of the Fallen.
It’s something of a mystery – but one that someone else will have to solve!

**
If you wish to comment on this article, please leave your thoughts in the comments-box below

2 thoughts on “▪Secret of curate who went to War”