Recently, the Sunday Bulletin newsletter in the UK ran a series of four articles called ‘Hidden From History’, each about a neglected female artist. Among the four was Margaret Rope.

These features, written by arts critic Joanna Moorhead, reminded us all of the astonishing discrimination against talented women that existed across the last 500 years. Not only that, but these artists also then had their achievements forgotten or ignored by the Establishment after their deaths. 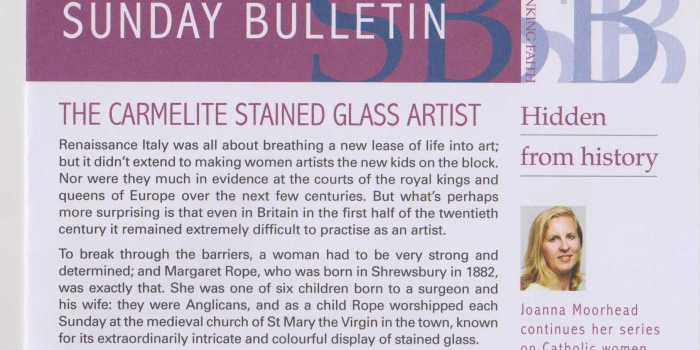 Ms Moorhead points out that, even today, pieces by female artists makes up less than 5% of the holdings of major art galleries; and only 3% of art books are about women practitioners.

The artists chosen by Joanna Moorhead for the series were: Artemisia Gentileschi, Elisabetta Sirani, Imogen Stuart and our own Margaret Agnes Rope.
Of them all, Gentileschi (who lived in the seventeenth-century) is the one now gaining wider recognition – her paintings are tours de force that leave one stunned.
Elisabetta Sirani, who had the fortune to have a father in the business, had competed thirteen public altar-pieces by the time she died in 1665, at just 27. (In this she vaguely resembles Margaret, who completed the largest stained-glass work produced by a woman at that point, the Great West Window, when she was only 29).
Imogen Stuart, the Irish sculptor, is still living, with sculptures in cathedrals across Ireland – but how many of us have heard of her?

Of course, the common thread to these four is that a male figure (often the father, sometimes a patron) is in the business, and – one presumes – has been open-minded and strong enough to support and promote the said female artist, who otherwise might never have made through the ‘glass ceiling’ at all. (For Marga, the male figure was her patron/mentor, Canon Moriarty).

It is however a dire reflection on the state of (male-dominated) art-criticism down the centuries that they get relegated to footnotes thereafter.

Fortunately, change is afoot. Moorhead reminds us that the National Museum Of Women In The Arts in Washington DC was founded in 1987, and it continues its mission to promote and acquire works by women artists.
(None of Margaret’s portable artwork is on show in galleries. A project to see one of her pieces get a semi-permanent display in Shrewsbury Museum appears to be foundering, while the two pieces of hers in American galleries have been buried in basements ever since they were acquired just over a decade ago).

But, never say die. Perhaps, in 2018, the year of the anniversary of women’s suffrage in the UK, one might see a quickening of progress…

_ _ _ _
For examples of the astonishing ignorance (discrimination?) concerning the work of Margaret Rope, even in her homelands, see our Neglected feature

If you wish to comment on this article, please write something in the comments box at the bottom of this page.