Though the actual moment passed quietly, this month has seen a red-letter day for Shrewsbury Museum. It became the only museum in the world outside America to have a piece by Margaret Agnes Rope on long-term display.

‘Judith & Holofernes’ is a fascinating piece (see pic right), which now takes its own place in a curious 500 year old history of the subject in Art.
The character of ‘Judith’ has long been a touchstone for how women are viewed in art – is she salacious & unfeminine, or strong & vengeful?

Judith & Holofernes is probably the first full-scale stained-glass piece done by Margaret; it is life-size, dating possibly to 1908. Though created as a student piece, she would have been around 25 when she made it, and it bears the influence of her teacher, the great Henry Payne.
Bizarrely, it was only rediscovered when someone saw it in a house in south Shropshire in the 1990s, where it was doing service as a bathroom window (see full story)!
It then was displayed in public for the first time at the Margaret Rope Exhibition in 2016.

But why did Margaret create a piece around this particular story?

The account comes from the ‘vulgate’ Old Testament: an Assyrian army looks likely to defeat the Israelites, so a young Jewish widow called Judith gets herself invited (using voluptuous charms? – we are never quite told) into the tent of the Assyrian general, murders him, and takes his decapitated head back to the relieved Israelite army.

It seems an odd subject for a young, refined Edwardian lady, especially at a time the ruling approach in art was still Pre-Raphaelite in mood, i.e. stuff of wistful legend. And, as she would have known, through her studies of art history, this was a subject that artists had treated with great force for very particular reasons for centuries.

By the 16th century Judith had become a popular subject in art. It has all the elements of that post-Renaissance moment of a fundamental societal switch – a woman changing history by bringing down a man.
Very often, these pictures depict the very action of the murder in most violent terms.

The most famous Judiths (though there are hundreds) are by Caravaggio (above) and by Artemesia Gentileschi, who painted Judith over half a dozen times, and they are still shocking to see.
(Though it is a moot point if Margaret knew the Gentileschi pieces, as Gentileschi was then often ignored in art history because she was a woman painter.  However, Marga did paint the same scene as in one of Artemisia’s versions, that is, the scene of Judith and the maidservant fleeing with Holofernes’ head).

Academics are often intrigued by the hold that this story has had on artists, and a good summary of the timeline is on Wikipedia’s J&H in Art page.

But the character of Judith walks the line.
Is she salacious & full of a disturbing anti-male feminine deceptiveness – or is she courageous & strong, bringing down an overweening power with no hesitation?
Artists are divided.

In the 1500s, Judith was sometimes bracketed with Salome and Delilah – women that men should beware of. And even 300 years later the great Gustav Klimt saw Judith as a disturbing seductress – his 1901 picture (see pic right) makes her contemptuous of the man whose head (which we can barely see) is now in her hands, and she is sneering with triumph.

But, on balance, Judith has come to represent the hidden strength – and violent potential – of women.

So, is it too much to suggest that Margaret, a confirmed ‘bachelorette’, picked a subject of an unexpected female triumph, whose ‘feminist’ journey through art-history she would have been quite aware of?  Margaret was in a bohemian milieu that resounded with the activities of the female emancipation movement.

Admittedly, Marga does shy away from the actual death-moment of Holofernes and prefers to depict Judith’s flight from the tent (though with the head still visible, and not in a bag).
But to depict a violent execution in a student piece may have been too problematic (!).

Shrewsbury Museum are to be congratulated on negotiating the long-term loan of this piece. Though the property of a private collector, nevertheless it should be on view in the museum for a good few years at least. 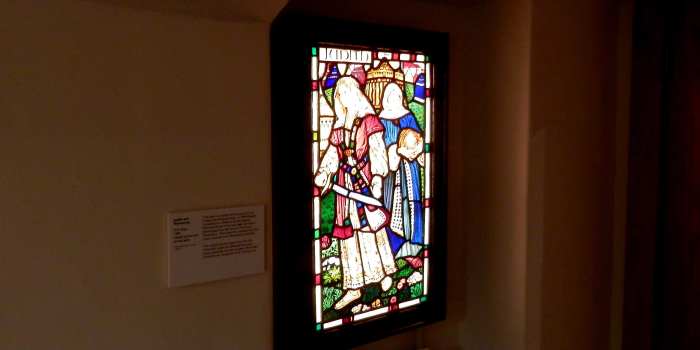 And, for the moment, it hangs, beautifully back-lit (see pic above), in the public entrance to the museum – so it is free to see for everyone.
To have a piece here in this museum by the greatest artist to have come out of this region is an achievement.

And, like nearly all Margaret’s other output, there is more to this art-work than meets the eye.

If you’d like an email alert to tell you when a new article is published on this website (about once a month), please click the ‘Follow’ button in the top right-hand column on this page.