We can only guess at why Margaret Rope made her radical decision to convert to Catholicism in 1901 at the age of nineteen, and why she then became such a strong adherent to this faith. The documents that could tell us that are simply missing – for now at least.
And indeed, it was a radical decision, because, for a hardcore of English society, Catholicism was still seen at this point as a suspect, ‘other’, even deviant, religion.

But, oddly, this very ‘otherness’ may have been one reason why conversion to Roman Catholicism was perversely attractive in some English avant-garde artistic cliques at the time. From Oscar Wilde (right) to Radclyffe Hall, they gravitated toward the ‘Old Faith’.

The re-establishment of the Catholic faith in Britain had got properly underway with the Catholic Emancipation of 1829, which freed Catholics from most of the restrictions which had been imposed on them by the British state for the previous three hundred years.
A busy revival then got underway, using for its core, the Irish Catholics who immigrated to England in the 1840s and, for its funding, certain recusant aristocrats (who paid, for instance, for the building of churches by the Catholic architect Pugin – which included Shrewsbury Cathedral).

By the 1880s, a number of other strands had joined to this original traditionalist approach: for example, some high-Protestant religious scholars became sincerely convinced that the ‘Old Faith’ (Catholicism) was the way back to true belief & practice (following Cardinal Newman).

And, in this mix, rather bizarrely to our modern eyes, some of the more outré artists of the time began to play with the idea of converting.

Nowhere to go, but…

Certainly, the Pre-Raphaelites’ dreamy world of romantic medievalism (circa 1860-80) was rather played out at this point in avant-garde circles. It had brought with it the other-worldliness they sought, but it lacked a practice for actual life.
However, Catholicism (of the Italianate type), offered to some individuals a degree of subtlety, recondite symbolic meanings, magnificent art and esoteric ritual – in other words, a refined exoticism, but one that could be practised in daily life.

In London, catering for this taste almost deliberately, the new Catholic churches were stuffed with colour & decoration.

The Brompton Oratory finished in 1884 (above) is breath-taking to this day, and the new supreme church of the English Catholic faith, Westminster Cathedral (built in 1902 in the face of much Protestant opposition) burgeons with bright Arts & Crafts Movement mosaics.

No wonder that Canon Moriarty demanded something spectacular from Margaret Rope for his cathedral at Shrewsbury – and he got it, in the shape of her astounding West Window (1910).

Margaret was baptised into Catholicism 1901, just as she was starting at the Birmingham School of Art.
Catholicism was a hot-point of debate in the stained-glass world into which she was entering.

Christopher Whall, the doyen of the ‘Later Arts & Crafts Movement’ stained-glass makers – whose approach to technique influenced Margaret heavily – had had a mystic experience in his twenties calling him to “dedicate himself to Catholic art”, and had then converted formally in 1878 (ref: Peter Cormack).
(It’s quite possible to claim that, in England at the time, a person with a serious mystical disposition might have found no other home but high Catholicism).
However, Whall’s ‘Catholic art’ is not passionless – it actually seethes with sensuality – nor did he destine it for Catholic churches alone. What Whall meant by ‘Catholic’ is not an adherence to a set of rules, but to a kind of sensibility.

One artist definitely persuaded by Whall’s new vision of religion was Lionel Johnson, the ‘Decadent Dark Angel’, who dedicated a poem to Whall in 1891; and who also subsequently converted to Catholicism.
Another Catholic stained-glass artist of this fin-de-siècle world was Paul Woodroffe, who made one of his early pieces for Hadley Church, only a few miles from Marga’s home in Shrewsbury.

Oscar Wilde is an interesting example of the phenomenon conversion. On being released from prison in 1897, he seriously considered entering the Catholic Church (not for the first time); but was only finally baptised into the Church in 1903, in his last, dying days.
Oscar Wilde pointed out the attraction of the Roman Catholic Church for these outré artistic figures. He said that Catholicism was “for saints and sinners” – while “…for respectable people, the Anglican Church will do”. With its emphasis on mystic Confession, Catholicism gave a sense of succour to outsiders who felt they had perhaps crossed society’s lines. Wilde also said that Catholicism was “the only religion to die in” (making Catholicism as a badge of honour for sinners? Well, it’s one interpretation).

Even that supposed pillar of the establishment, the composer Edward Elgar (the son of a convert) felt himself throughout his life to be an outsider – and so in fact took strength from publicly identifying as a member of an outsider religion, i.e. English Catholicism.

And so, we have a rather strange group of people gravitating towards Catholicism. They could, for sure, be called ‘sinners’, and all have an extreme, exotic sensibility. They are frankly, quite strange people, most of them far from the fringes of respectable society! 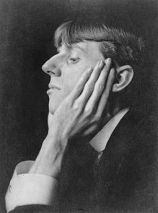 And so to Margaret Rope.
If a person had a profound feeling about spirituality in the 1890s, it would have been difficult to ignore the febrile atmosphere surrounding religion at the time, especially in artistic milieus.

Margaret, we can guess, was aware of this; it may even have contributed to her conversion – and we know it certainly influenced her attitude about the mix of art and religion in a modern age.
She lived in Bohemian circles in London for over a decade, so she must have been aware of the sensational ripples her fellow Catholics causing.
But what she thought of these figures… we just don’t know.

**
References:
“Roads to Rome: A Guide to Notable Converts from Britain and Ireland From the Reformation to the Present Day” by John Beaumont (published by St. Augustine Press, 2010).